Skip to Content
This article may contain links from our partners. Please read our Disclaimer for more information.

Download our free Pool Maintenance Starter Kit and learn how to manage your pool affordably and efficiently.

Download our free Pool Maintenance Starter Kit and learn how to manage your pool affordably and efficiently. 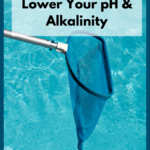 Pool maintenance goes beyond scrubbing and cleaning the tiles. Pool water must be treated to keep it clean and safe. Failure to treat pool water will result in imbalances in its overall pH and alkalinity levels, posing many health issues.

Sodium bisulfate is one of several chemicals used to treat pool water. It is generally considered safe, but it should be used properly for the best results. Here is a comprehensive overview of how this chemical works and how you can use it to lower your pool water’s alkalinity and pH levels.

What Is Sodium Bisulfate Pool?

Albeit sodium bisulfate is formed by combining sulfuric acid and a sodium base, like sodium chloride or sodium hydroxide. It still maintains a highly acidic pH rated at around one. Consequently, it is used as an acidity regulator to lower the pool water’s overall alkalinity and pH levels.

Sodium bisulfate appears as a white and grainy crystalline solid, which is stable and easily dissolves in water. However, it is worth noting that this substance is corrosive to flesh and metals (and should be used carefully, as directed later).

Why You Need Sodium Bisulfate in Your Pool

Everyone knows that you need chlorine in your pool water. Chlorine does an excellent job of keeping the water clean and clear. However, it has a limited life expectancy, and it cannot work properly if the pH or water alkalinity levels are not ideal.

Additionally, the resulting toxicity in the pool water makes it hazardous and poses risks such as skin irritation and other health risks. There are other acids in the pool business, such as cyanuric acid and citric acid, but they are not used for adjusting pH or alkalinity levels. Sodium bisulfate is used for this purpose.

Sodium bisulfate can be used in many ways, such as food additives, and it also functions as a pH reducer for pools, as explained. Consequently, it helps to support the role of chlorine, which prevents cloudy water, thus keeping it clean and safe for swimming. To maintain efficient sanitization, we should adjust pH and alkalinity to keep water in LSI balance and in non-stabilized pools without any cyanuric acid (CYA).

When Is It Appropriate to Use Sodium Bisulfate for Pools?

It is always advisable to use safe amounts of all pool chemicals, including chlorine and sodium bisulfate. So, how do you tell it is the right time to add this dry acid to your pool water? The trick is to look for signs that chlorine’s efficiency is wearing off.

Chlorine has a limited life expectancy, as explained. Some of the signs that chlorine is becoming ineffective include:

It is advisable to add an appropriate amount of sodium bisulfate (as discussed below) to your pool water as soon as you observe these signs and changes. It is also important to ensure that the pool undergoes regular maintenance, including cleaning the pool’s surface, changing the pool water, and adding necessary chemicals such as chlorine.

However, it would be more prudent to add sodium bisulfate to your pool water before these signs appear. You can do this by testing the water regularly to determine its pH and alkalinity levels.

Make sure to pour the powder (or mixture) into your pool near the return jets and not near the intake/skimmer (for an inground pool) and around the walls of the pool (for an above-ground pool). Also, note that using it continuously over time can lead to sulfate deposits/scale in vinyl pools and can attack and permanently scale concrete and plaster surfaces.

So, how much sodium bisulfate should you add to your pool. Too much of this chemical may be hazardous to you and the pool equipment (it is acidic, after all), while too little will be ineffective (which is also hazardous).

The appropriate amount of sodium bisulfate to add will depend on factors such as the water’s overall alkalinity and pH levels. Most sodium bisulfate packages include instructions on how much to add based on these and other factors. However, it is easier to use a SODIUM BISULFATE POOL CALCULATOR for a more accurate measurement.

How to Lower pH with Sodium Bisulfate

Here is a step-by-step guide on how to reduce your pool water’s pH levels using sodium bisulfate:

Start by testing the pool water’s current pH levels using a test kit. Ideally, the pool’s pH should range between 7.2 and 7.6. 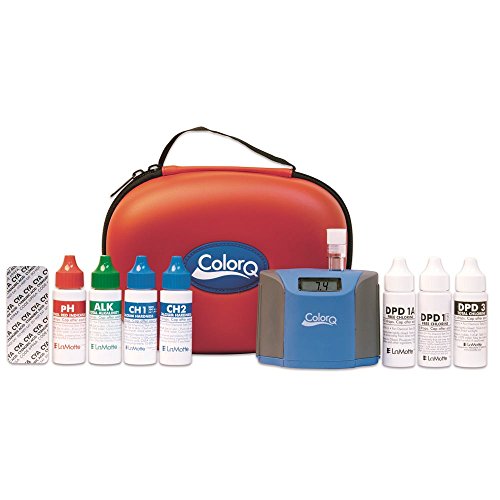 As explained earlier, it is essential to add the right amount of this pool pH reducer. Fortunately, using a sodium bisulfate pool calculator, you can easily determine the right amount depending on your pool’s size, pH levels, and other factors. Be sure to use proper protection when handling this pool pH decreaser!

As explained, sodium bisulfate comes as a slid crystalline and dissolves easily in water. However, it is still advisable to dissolve to power in a small container before adding it to the pool water. Additionally, adding the chemical as a solution makes it easier to spread around the pool evenly, consequently making it more effective.

It is also advisable to add the dissolved sodium bisulfate to your pool water near the jets. By doing this, the chemicals will be dispersed evenly across the pool due to the force generated by the jets. 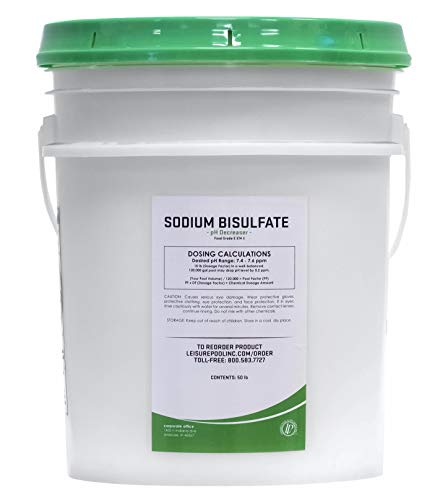 Albeit sodium bisulfate dissolves quickly in water, it still takes some time to bring the pool pH down. Additionally, the chemical can cause irritation and other health risks when exposed to the skin.

As such, it is advisable to wait for about six hours before resting the water and swimming in it – it may take a shorter period, but six hours is the recommended time. Then, finally, retest the pool water’s pH levels before taking a dip. 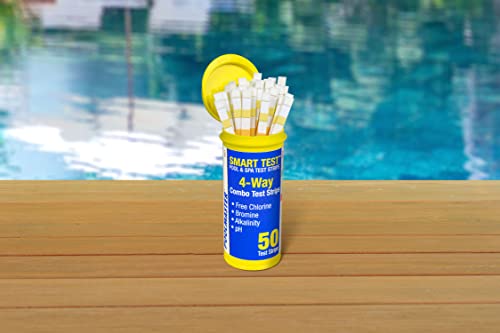 How to Lower Your Alkalinity With Sodium Bisulfate

The process of lowering your pool water’s alkalinity levels using sodium bisulfate is mostly similar to the process described above: testing the water, adding the chemical, and then retesting the water after some time to ensure that everything is balanced.

In this case, you will be testing the water’s alkalinity levels, which should range between 80 and 120 parts per million (ppm). Additionally, the amount of sodium bisulfate to add will depend on factors such as the alkalinity and pH levels – it can be confusing. So it is advisable to use the pool calculator. Additionally, remember to dissolve the sodium bisulfate and add the solution close to the jets. It is also advisable to wait at least six hours before retesting or using the water.

Also, out-of-balance alkalinity and pH levels can cause corrosion or buildup on pool equipment, stained pool tile, cloudy pool water, irritation to the eyes and skin, and a faster breakdown of chlorine molecules.

Sodium bisulfate is generally considered safe. However, it is still important to handle it carefully, considering that it is acidic.

Consequently, it is advisable to wear protective clothing when handling concentrated amounts of the substance. Additionally, it is prudent to wait for at least six hours before using the pool after adding sodium bisulfate. Finally, using an appropriate amount of the chemical is advisable, as too much of it can be corrosive to you and the pool equipment.

Here are some tips to help you make the most of sodium bisulfate for your pool:

Sodium bisulfate acid is one of several pool chemicals used to stabilize alkalinity and pH levels. Other popular types of acids include:

Muriatic acid is one of the main alternatives to sodium bisulfate, and it has the same effect: lowering alkalinity and pH levels. It is probably the most common and most used type of acid and is also called hydrochloric acid. Notably, it works faster than sodium bisulfate, thanks to its liquid state and high concentration – however, these are also potential health and safety setbacks, as discussed below. 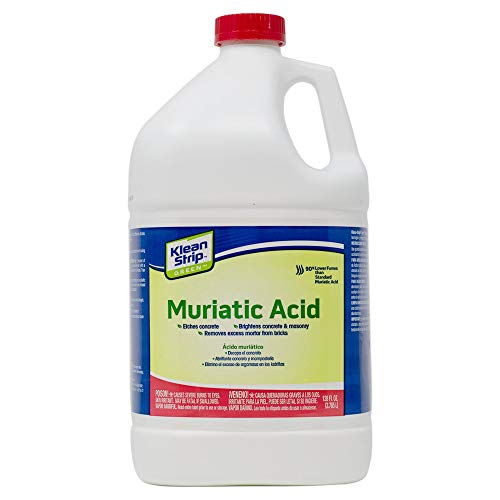 Cyanuric acid is an essential chemical often used to stabilize chlorine, thereby increasing its life expectancy. Research shows that almost 50% of chlorine is burnt out by UV sun rays barely 20 minutes after adding it to pool water. It is worth noting that cyanuric acid also comes as crystals and should be dissolved before adding to the pool. However, this chemical doesn’t affect alkalinity and pH levels. 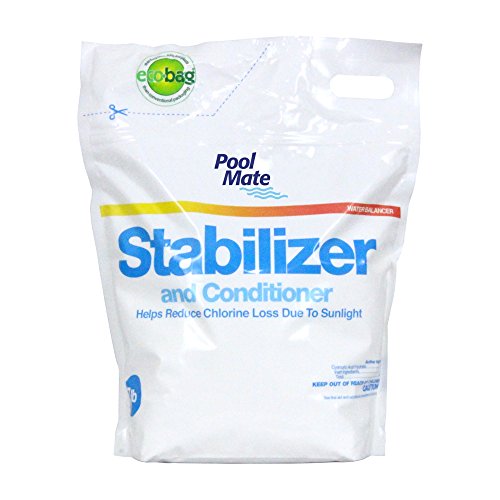 As mentioned, muriatic acid works slightly faster than sodium bisulfate and does just as good a job as the latter. So, which is better?

Experts always recommend sodium bisulfate because it is safer than muriatic acid. Muriatic acid is highly concentrated and can easily burn through the skin or choke your sensitive breathing organs. Additionally, it comes in liquid form, which is more difficult to handle than solid sodium bisulfate. Consequently, it is always advisable to wear protective gear such as gloves, goggles, masks, and boots to handle muriatic acid.

Besides, sodium bisulfate works just as fast when dissolved, as explained. It is also generally easier and safer to use.

Is Sodium Bisulfate the Same as Muriatic Acid?

How Much Sodium Bisulfate Do I Put In My Pool?

The amount of sodium bisulfate to put in your pool will depend on factors such as the volume of water and its overall alkalinity and pH levels. It is important to add the right amount as too much can be hazardous. You will find instructions on the sodium bisulfate’s packaging. Alternatively, you can use a sodium bisulfate pool calculator to measure more accurately.

Sodium bisulfate is generally safe to use and handle and is even approved by the CDC. However, it may be hazardous in highly concentrated levels, especially when dissolved in water. Additionally, it can blow into the eyes and on open skin in windy weather, causing irritation and other problems. It is advised to handle sodium bisulfate carefully and wait at least six hours to swim after adding it to pool water.

Why Does It Matter if My Pool’s PH Is Too High?

A high level of pH in your pool water is a cause for concern because it is hazardous. It supports the growth of fungi and other harmful microbes in the water, making it turn cloudy or green. Consequently, the water becomes hazardous, making it irritating to the skin and causing diseases. To balance and lower the pH levels of the water, sodium bisulfate should be used.

Is Sodium Bisulfate the Same as Soda Ash?

No, sodium bisulfate is not the same as soda ash. However, it is often referred to as bisulfate of soda, hence the confusion.

Is Sodium Bisulfate the Same as Baking Soda?

No, sodium bisulfate is not the same as baking soda. It may be confused as such because it is referred to as bisulfate of soda and is a common household item.

Where to Buy Sodium Bisulfate?

Sodium bisulfate is considered safe and approved by the CDC. Consequently, it is sold freely in the market as an uncontrolled substance, including on e-commerce sites such as Amazon. However, it is important to ensure that you buy this chemical only from a credible merchant for safety purposes.

As explained in this comprehensive guide, sodium bisulfate is essential to keeping your pool clean and safe for swimming. It helps to lower the water’s alkalinity and pH levels, thus enabling the chlorine to keep the water sparkling for longer. It is generally safe to use, but remember to use the appropriate amount and handle it with care.

For over 15 years, Sean Moore has been sharing his love and enthusiasm for swimming pools and hot tubs with everyone he knows. His goal is to help everyday people DIY their maintenance to save money by teaching how to properly take care of your equipment, safely and correctly balance chemicals, and extend the life of your water oasis.